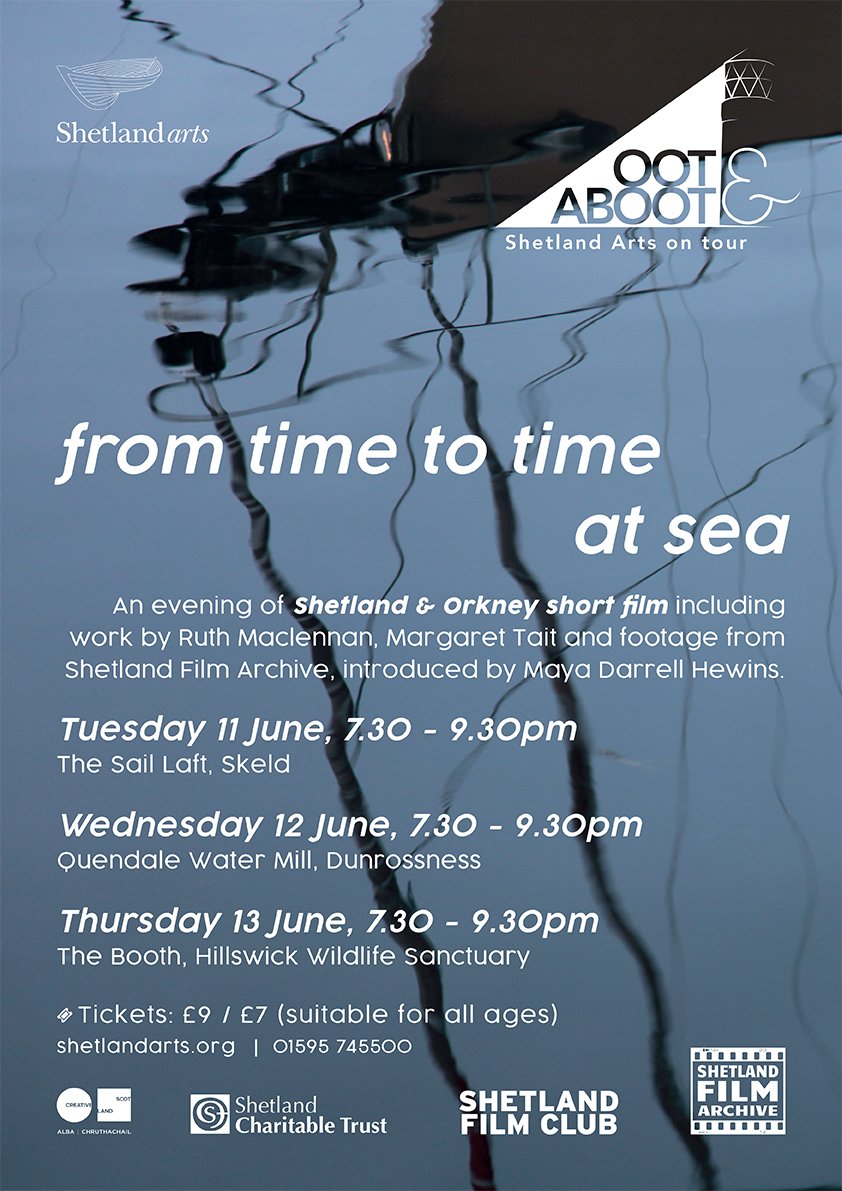 Shetland Arts host a tour of short film from Shetland and Orkney, featuring artists Ruth Maclennan and Margaret Tait, programmed alongside a selection of locally made footage from the Shetland Film Archive presented by Maya Darrell Hewins.

From Time to Time at Sea (2015) was made by artist Ruth Maclennan between 2012-2015 and shot on and around Orkney, Fair Isle and Shetland, from boats, the tops of cliffs, on beaches and along winding roads. The voices of poets, fishermen, a taxi driver, retired farmers, scientists, anthropologists and engineers, twitchers, and rangers overlap with the sounds of boats, seabirds, wind, sea. Stories and conversations ebb and flow, swept along by the tides, drifting away on the wind. An old Norn song, talk of tidal power, fishing, climate change, childhood memories, the daily bird count come in and out of earshot, hovering above the constant, moving, sea. The film was commissioned by Cape Farewell and shot during the Cape Farewell Sea Change expedition to Orkney and Shetland, and on an Erland Williamson Arts Foundation residency in Birsay, Orkney.

To commemorate the centenary of Scotland’s pioneering filmmaker and poet Margaret Tait, Portrait of Ga (1952) will also be screened, Tait’s film portrait of her own mother shot in Orkney in 1952. Born in 1918 in Kirkwall on Orkney, Scotland, Margaret Tait qualified in medicine at Edinburgh University in 1941. From 1950 to 1952 she studied film at the Centro Sperimentale di Photographia in Rome and went on to become one of Scotland’s most celebrated experimental filmmaker. Her only feature, Blue Black Permanent (1992), will be screening at this year’s Screenplay Film Festival at Mareel.

A changing programme of local film from the Shetland Film Archive will also be presented by Maya Darrell Hewins, along with a game of film archive bingo. Maya Darrell Hewins is currently undertaking a PhD at Shetland College UHI, investigating management practices, access and sustainability issues of community-led moving image archiving initiatives, with an emphasis on digital technology and (re)use. She is working with the Shetland Film Archive and comparison organisations to explore models that might help these groups achieve their ambitions and address challenges to their long-term stability. Maya has a background in creative arts production, exhibition and education, working for a number of music and film festivals, art galleries and charities across the UK. She has taught and written guides on practical animation and filmmaking for young people and has worked as a cinematographer and editor, as well as in a film digitisation and restoration lab.

The event is part of Oot and About, a touring programme of Shetland Arts activities and events.